By Michael Owuor and Walter Nyakinda

14,000. This is the number of young people in Kenya who were buried by their loved ones in 2018 as a result of drug abuse.

The National Campaign against Drug Abuse (NACADA), is a national governmental agency which is responsible for tackling this serious problem. Over the past year, NACADA reported an increase of anti-social behaviour among the youth, a fact linked to substance abuse.

For the residents of Manyatta, an informal settlement in Kisumu County, Kenya, this is a story they know all too well. They witness on a daily basis the effects of this menace that has resulted into increased crime, sexual abuse and poverty in their community. They are determined to stop it, one step at a time.

Boniface was trained on nonviolence campaigning by Turning the Tide (TTT) Kenya. Today, he is a Community Resource Person (CRP), training others on how to bring social justice by using nonviolent tools. Boniface is also a member of a community group in Manyatta called Gonda Residents Association.

After the TTT training on nonviolent campaigning, Gonda Residents Association decided to launch a campaign against illicit alcohol brewing in their community. There were reports that children as young as four years would return home smelling of alcohol. TTT supported them in their campaign.

At first, they approached the lady running the illegal brewing, asking her to close the business. She was arrogant, informing the group that she was going nowhere. True to her words, she had the support from the local police and the local administration who she bribed.

Using the knowledge and skills from the nonviolent training, the group wrote and submitted a petition to the County Commissioner on their plight. Aside from the petition, the campaigners approached the media to report on the issue. Their work was successfully reported on Daily Nation newspaper, highlighting the campaign.

One of the campaigners explained their strategy: “When you cannot break the pillars that support the injustice, elicit the help of a higher placed ally, who will crush the whole system and its support.”

On realizing that the County Commissioner was informed and involved in the campaign, and that the police and local authorities no longer took her bribes anymore, the lady closed shop and fled from the area.

Another result of the campaign was also that the County Commissioner ordered more police patrols in the mornings and in the night. The community members reported that this significantly increased the security in the area.

“We are happy our concern has been dealt with. However, there are still other places where illegal brews are being sold. They harbour thugs and contribute to insecurity”, concludes Boniface Opondo.

The campaigners’ experienced threats and intimidation from hired thugs and opponents of the campaign. While the number of campaigners decreased, the remaining campaigners sought alliances with other community groups, the media and civil society groups.

The campaigners told us that they will continue with the campaign against other illicit brewing in other areas within Manyatta. The campaign has also grown to involve other community groups like Disability Agenda Kenya, Amani Caregivers Group and Kondele Social Justice Center.

Going forward, the campaigners will pursue collaborations and dialogue between the community and police on this matter. 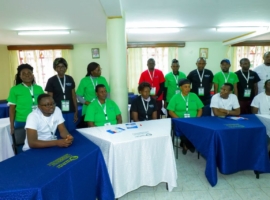